(Hi)Story of a Larch Tree

Published by Livigno on November 02 2020

Larch, in dialect "lárasc" is a tree that turns yellow in autumn and has always been the subject of various uses in local culture.

Photo copyright Samuel Confortola
Autumn in the mountains is really a wonderful season, the woods are painted with warm colors from yellow to orange and everything is preparing to welcome the winter.

Nature knows it well when it is time to change, the temperatures slowly get colder and colder, they invite the territory to change, the meadows turn yellow, the water begins to flow less abundant in the streams and the plants begin to change color.

If you look carefully in the woods of Livigno you will notice that only one specie is tinged with yellow, it is called Larch tree.

The Larch is a conifer, very common in the Alps and grows at high altitudes. Thanks to its great spirit of adaptation, it found its ideal habitat in Livigno. There are enchanted forests of centuries-old larch trees, the oldest reach 700 years of age!

Just think that among the Italian flora, they are the only species of conifers that is not evergreen but deciduous, because it strips its leaves in autumn and winter.

It is not known exactly when the valley of Livigno began to be inhabited by men: certainly the thick larch woods, so characteristic of this glimpse of the Alps, have proved to be very useful to survive in a rigid and stingy environment.

It is said that between 1200 and 1400 the woods of Livigno suffered many cuts for the creation of the coal necessary to feed the ironworks in the nearby Cancano and Premadio. In some woods of Val Saliente are still visible areas where the wood does not grow back because of charcoal in the terrain. 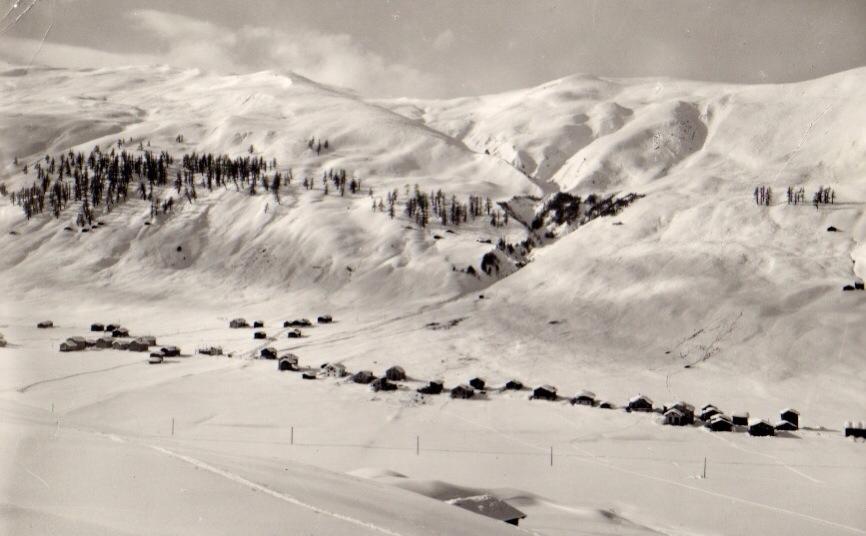 Panoramic view of Livigno and the decimated forest. Trees were valuable for building houses and objects, as well as for heating and cooking. Furthermore, around 1300 the trees were cut to feed the ironworks of the nearby Cancano and Premadio.

Gradually it was realized that the resource wood was a precious asset and the cuts were increasingly controlled and contingented, trying not to waste even a twig!

The larch is a tree with hard and resistant wood, with a more marked vein than other woods typical of the area (pine and fir). It has very compact knots and, over time, rots slowly, tending to darken. For these characteristics, it is used in construction, especially for roofs, floors and some windows, since the most remote past.

The roofs had to be strong and, at the same time, efficient in supporting the weight of snow that accumulated in winter: for this reason, in the central parts more stressed, small shingles were placed light and resistant, one on top of the other with great skill. These shingles, similar to sheets of wood, were obtained from the waste of the trunk no longer usable for boards and trusses, so as not to waste anything.

An old man revealed to us that, in order to make shingles, the larch trees from the Wood of Resc'tèl were absolutely the best. 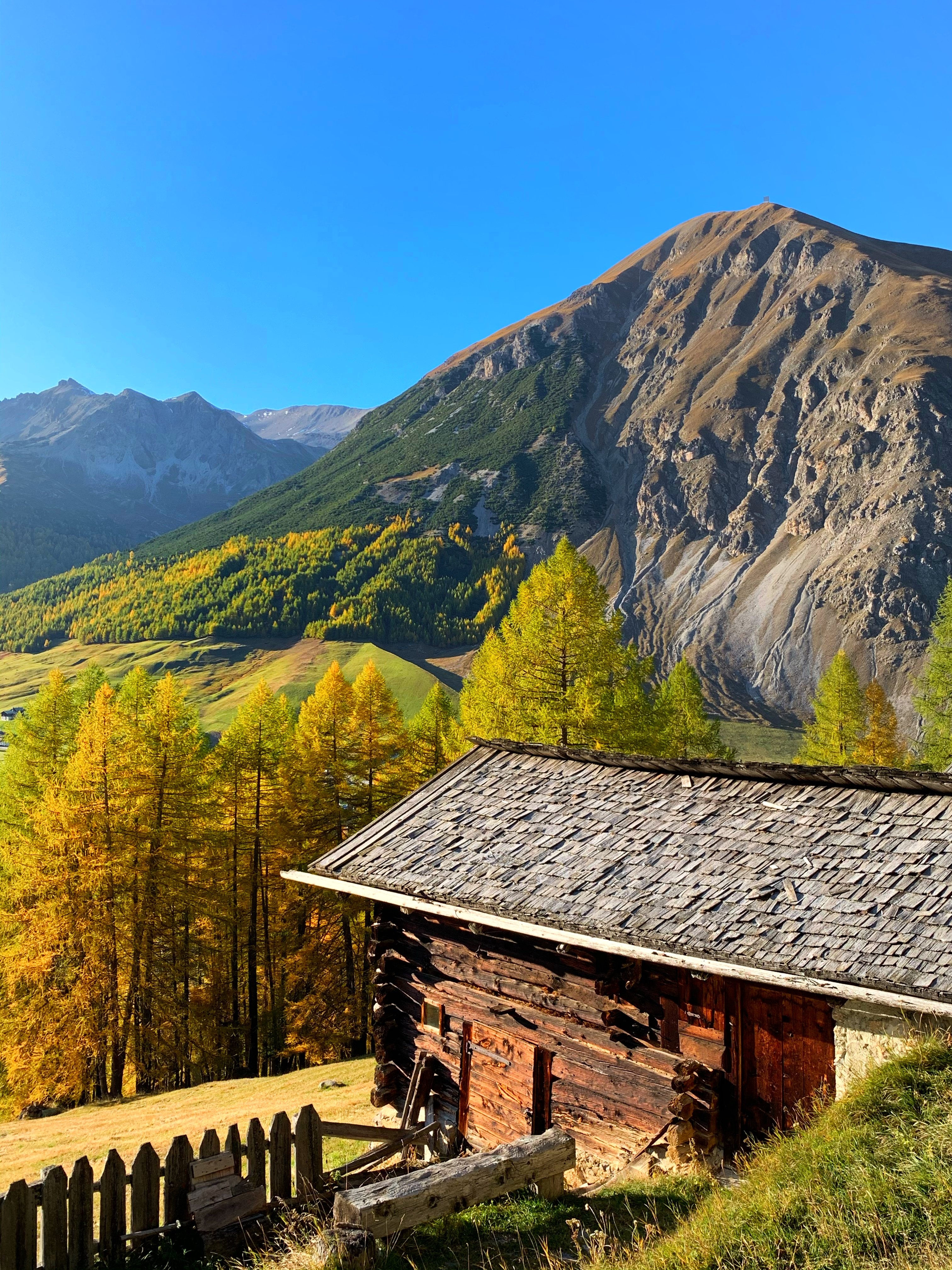 This is a "Tea", typical Livigno hut, with a roof made of larch shingles

Even the stables were almost entirely made of larch, since this wood is very resistant to humidity: think of the climate that was created in the environment where the animals stayed for the whole freezing winter!

Over the centuries the river Spöl (Aquagranda in the past) has created quite a few headaches for the locals, flooding and creating considerable inconvenience: an effective solution was to place along the banks of the river artificial embankments, called cipèda, consisting of three portions of larch trunk embedded in the ground, to try to contain part of the fury of the water.

As far as furniture was concerned, larch was used for chairs, tables and benches, while for chests of drawers, closets, bedheads and covering of the beautiful sc'tue was preferred pine wood, softer and more fragrant.

The larches were not only used for wood: its resin, called larghè, harvested in spring by making an incision in the trunk, was used as an ointment for cuts and wounds or as a poultice for coughs.

The lichens that grow on its trunk and branches, called bàrba da làrasc, filamentous and of a pale yellow green, were used to dye the fabrics of a straw yellow, or as bait to light the fire. The inner part of the bark, characterized by an intense red color, was also used to dye textile fibers. 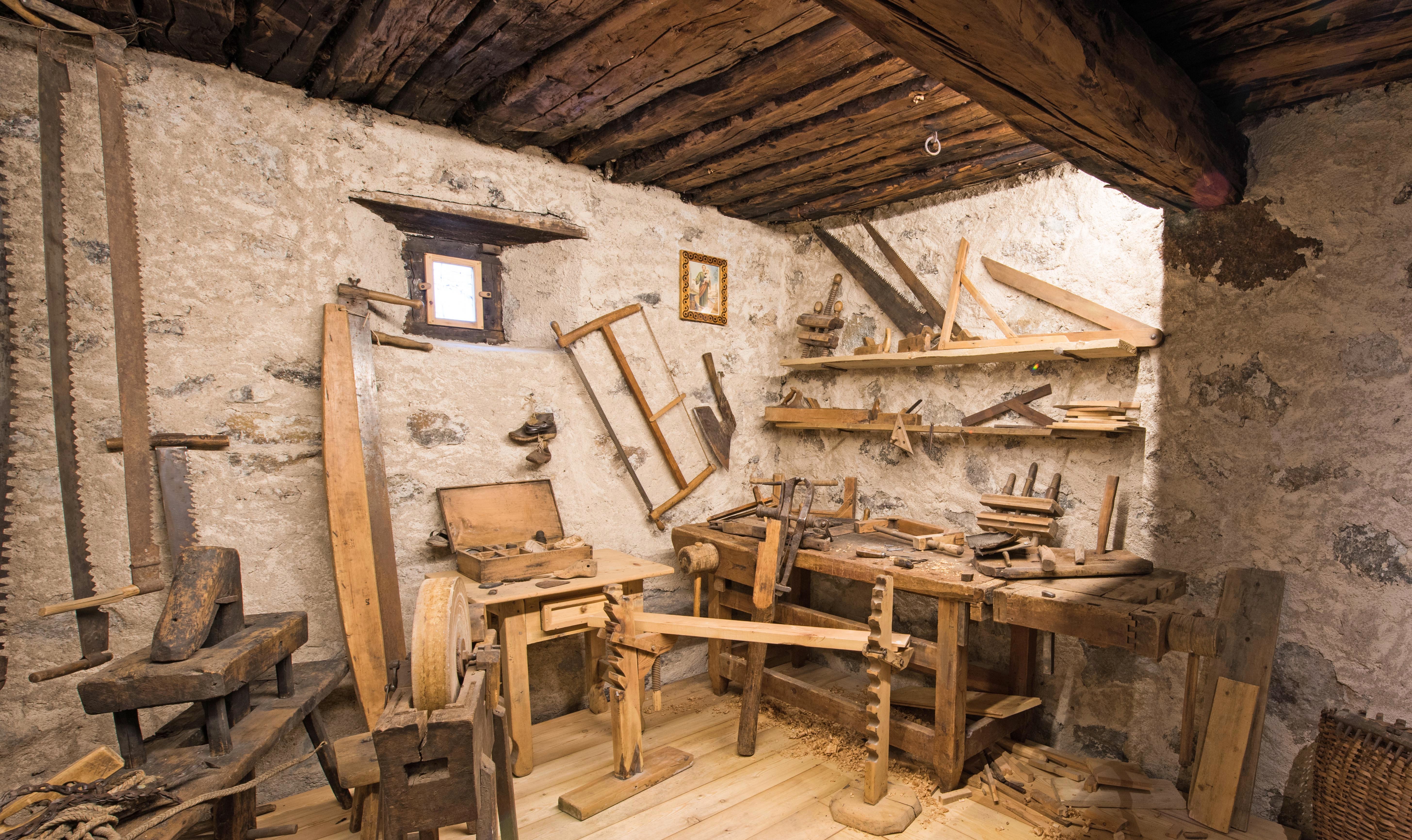 At the Mus! Museum of Livigno and Trepalle, it is possible to admire a room that contains ancient tools that were used especially during the winter months for woodworking and the creation of furniture and objects of daily life.

The larch is a plant that colors the seasons and thanks to its properties has been a useful resource for the community. At MUS!, the Museum of Livigno and Trepalle, there is a large collection of tools and furniture directly from our past. Here you can find historical anecdotes and historical pictures that tell how the valley of Livigno has changed over the years, thanks also to the cutting of larch trees. To keep up to date with the opening hours of the MUS! we invite you to visit the website: https://www.livigno.eu/en/museum

Would you like to see the most beautiful woods of Livigno Larch? We recommend you to read the article below, where we recommend the best routes to discover the colors of autumn!