Published by Livigno on October 29 2019
During their altitude training in Livigno, the Italian swimming star and the cross-country skiing champion have challenged each other to the rhythm of their strokes in the Aquagranda Active You! swimming pool. Pellegrino, then, challenge Federica on skis: appointment next autumn in Livigno? 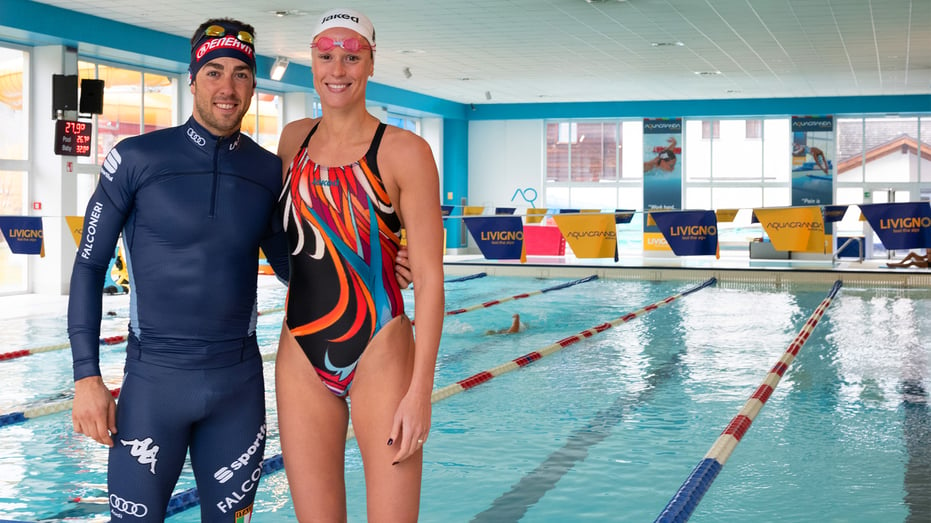 You don’t have to be champions of the same sport to compete in a race,worthy of being remembered: it happened this morning in Livigno, where the champion Federica Pellegrini launched a challenge to the last stroke to an athlete who has very little in common with her.

Crossing the entrance of the Aquagranda Centre, ready to compete in the 50 meters with the star of the Italian swimming, was the world champion of cross-country skiing Federico Pellegrino, that in these days began his preparation on the ski ring of Livigno, that opened the 19th of October.

Both in Livigno with their national teams, the first to prepare for Tokyo 2020 Olympics and the second for the World Cup races, Federica and Federico have challenged in the semi-Olympic swimming pool of the sports and wellness centre Aquagranda Active You!: despite competing in a sport totally different from what is his speciality, Federico did not want to give up his being a cross-country ski champion and faced Federica wearing not only his ski suit but also the band that always accompanies him when he goes on the track.

The great commitment and determination of Federico could nothing on the experience and technique of Federica Pellegrini, that at the end of the challenge, however, accepted the invitation of the cross-country champion to wear skis for a rematch on the cross-country track of Livigno: the appointment then next year, after the Tokyo Olympics.

United not only by the name and by the fact of being winners of gold medals, but also from the pun tied to their surnames, Federica and Federico met in the "Piccolo Tibet" with a common purpose: to prepare for the different races that await them taking advantage of the versatility, structures and especially the height of Livigno: with its 1816 meters, it is the ideal place to carry out an athletic training  benefiting of altitude training, which acts on the transport mechanisms of oxygen improving all the performance of the body.

Therefore, for some time now the 25-metre Aquagranda pool has been the location of the Italian National Swimming Team: since last September, in addition to Federica Pellegrini also the rest of the team has reached Livigno for their preparation, including Gregorio Paltrinieri, Simona Quadrella, Margherita Panziera e Gabriele Detti.
The Italian Cross-Country Skiing Team, together with the French, Czech, German and Estonian Skiing Team, has also reached  the "Piccolo Tibet" to begin the training: since last 19th October, the athletes have been able to put their skis on their feet and cut through the snow of the cross-country ring, made with the snow preserved during the summer through the Snowfarming technique.

This technique consists of an innovative method of snow conservation based on the use of sawdust and geothermal sheets, which protect it from high summer temperatures and prevent melting.
Not only the Snowfarming allows to anticipate other locations at the beginning of the winter season, a season that in Livigno opens before any other ski destination, but the Snowfarm also promotes sustainable energy and fuel savings otherwise necessary for the handling and production of artificial snow.