Published by The Owl Post x Livigno on October 15 2021 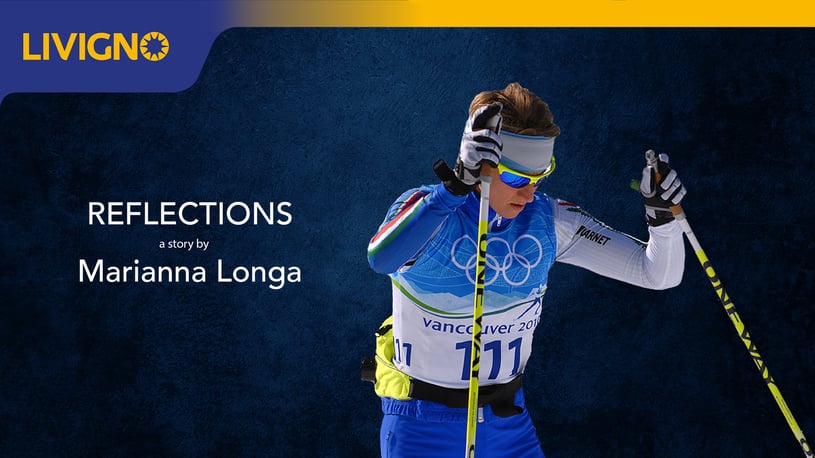 The best version of oneself always appears reflected in others, in their qualities and ideas. Parallel worlds, changed by time, and made different by life, that sooner or later touch each other, and draw common parables.
At least for a while.

The first time it was "the others" who brought out the passion, determination and competitiveness in me, I was just a child.
In the cold winter of Livigno, my father had decided to let me try cross-country skiing. I was an alpine skier, and I felt like an alpine skier. At that time there wasn't the wide choice that there is today on doing sport. The course I was enrolled in was one of those organized by the school, and if it had been up to me, one lesson would have been enough.
It was devastating. Not only was it exhausting in an absolute sense, but for me, it was even more exhausting than the others, which seemed to glide lightly on the tip of the snow.
Last, at the bottom, detached from everyone: I came home well convinced never to do it again.

But my parents had already paid for the whole package of lessons and so, those weird, tight, heel-free skis, me, I would have to put them on again. And so, it was the group that pulled me along, awakening something that was already mine, even if I didn't know it yet. I didn't want to be far from the best, trudging along at the back.
I wanted to arrive, to reach the first ones.
And ski with them.

Day after day, they made me fall in love with cross-country skiing, making me see that even within the fatigue the game exists, it exists indeed. We created routes, challenges, threw the ball around, all with skis firmly on my feet, which became an extension of my body.

The second time I mirrored myself in someone, to discover something about myself, was just a few years later, when I had to move to attend high school. To those who don't know the mountains it might seem strange, but often at these latitudes, between hairpin bends and passes to climb, distances are multiplied by two.
When I arrived at boarding school, even though I wasn't that far from home as the crow flies, everything was distant, starting with my ski team.

The boys and girls who had infected me with a passion for cross country were gone, and I had to start all over again. I thought about quitting, as would happen to me other times in my career, but thankfully I didn't, except for the last one.
Leading the new team was a gruff, strict coach, whose edges I saw nothing but at first. I was a shy teenager, always on her own, who could only fully express her character in competition.
And that authoritarian figure frightened me. Then, I began to see reflected in him my own fire and drive to get there. Each workout I understood him a little more, and so did he, until we recognized that we were thinking the same thing and became inseparable. He was my flea in my ear, my mentor and my guide from the age of 14 until I stopped skiing, and whenever I had a doubt or a difficulty, four steps together always solved everything.

After moving to boarding school, it was the turn of the 1994 Lillehammer Olympics, and there, watching the Italian team, I think I wasn't the only aspiring cross-country skier to dream of becoming strong for real.
Silvio Fauner, Manuela Di Centa, Stefania Belmondo: a generation of phenomena dragged the Italian flag to the roof of the World, and I, from Livigno, with my eyes glued to the TV, began to fantasize about joining them. To reach the highest peaks and go everywhere to represent the Country, and also to represent my own country, the one with a small c, where I had grown up and where I would return to build my best years.

To become a strong athlete, there are no shortcuts or secret tunnels. Having a good engine counts, there's no doubt about that, but in a sport like cross-country skiing, what makes the difference is hunger. The simple, evergreen hunger.
Today it is not uncommon to see the great international champions, from Norwey on down, passing through the streets, both in summer and winter, as they come to Livigno to prepare for the high altitude season. And I can't help thinking about how much I would have liked them to have been there even twenty years ago, when the horizon was completely different. I would have paid out of my own pocket to join the group every now and then, to steal a few secrets from the best, or even just to train with friends.
After my school years, I returned home and began my journey as a professional athlete, made up in equal measure of stubbornness, love of hard work, and a bit of sports heroism.

I trained mostly alone, with no references alongside, grinding out mile after mile in total solitude. Take away the collegiate,  the travel, and the competitions, my routine was all solo, and that required a lot of creative effort.

With no one to reflect myself to, I began to imagine others, building my dream team, composed only of champions.
Every day, depending on the type of training that awaited me, I visualized having at my side, or in front of me, the strongest adversary or teammate I could think of, and I competed against her.
One challenge a day, chasing the ghost of the day, which gave me the stimulus to always improve, even when it seemed impossible to do so. My imagination managed to keep alive the memory of the game as a child, the one that had made me fall in love with skiing, and despite the bad weather, it allowed me to climb to my peak.
The image of the others was only an illusion, but sometimes all it takes is a successful trick to cheat fate and reach the gates of Olympia. 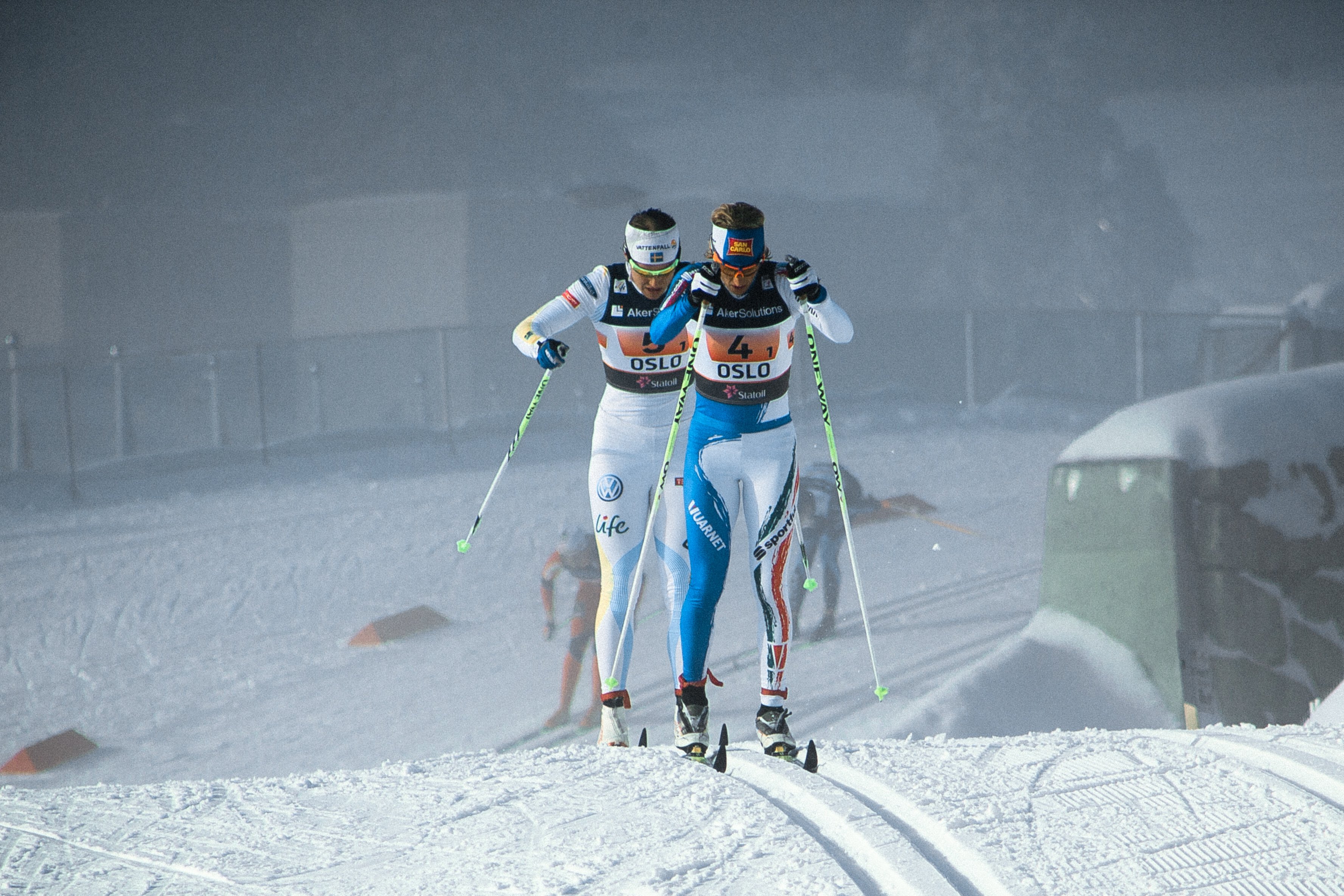 During the 2002 Salt Lake City Games I was only 22 years old and I wandered around the Village like Alice in Wonderland. Everything was huge, in full American style: from the Opening Ceremony to the athletes I passed in the cafeteria, to the responsibilities I felt I had. Under the Hoops: a very strong and indescribable emotion that kept me breathless throughout the event.
Far more earthy, and easily described, was race day, however, where the tension played a nasty trick on me. Our relay team lost a medal, and it was my fault, as I collapsed halfway through the split, overcome by the outline and its magnitude. It's a strange feeling to have left others stranded. There's a bit of bitterness and a bit of shame. But in the end, only you feel it, because the others see their past failures in yours, and they forgive you quickly.
Defeat in sports is an open secret, and time fixes everything. Even if sometimes it does so in curious ways.

The next Olympic cycle, in fact, was that of Turin, the home Games, and the entire group of female athletes looked at the Piedmontese appointment as the opportunity of a lifetime. I would arrive there at the height of my youth, with all its strength, but also with a fair amount of experience behind me. I hadn't reckoned, however, with destiny, which decided to make me a mother right between the 2005 World Championships in Oberstdorf and the Olympics. At the time it was a strange, bittersweet feeling because becoming a mom is a wonderful journey, but it had still cost me two precious medals, the ones won by my teammates.
I was one step away from saying enough, as I did as a child.
When you become a mom, you can no longer be a professional athlete. It sounds like an exaggeration, but it's not far from the truth. You can continue to work hard, you can lengthen the hours of the day to train while your child sleeps, but you still won't be able to rest as much as before, sleep as much as before and devote all your mental energy to one goal.

But it was this very difference that made me feel strong. Reflected in my son's eyes, I saw the image of a woman who was still strong, tenacious, with a physique happy to withstand pain, and who made her own hard head a source of pride. And I restart again. More determined than ever, meaner than anyone.
I kept going and didn't give up. Sometimes my mother would follow me on trips, acting as a grandmother and a babysitter, while I divided my time between mother and athlete, trying to offer the best of both worlds.      So, eight years after the first ones, and four after the ones I watched while breastfeeding, I returned to the Olympics, back in America, this time in Vancouver. I was a different woman, infinitely more aware. I was a mom, aware that there is more to life than skiing, and at the same time a skier grateful to be back living the sport at the highest level. We were fourth there too, a wooden medal as in 2002, but this time it was a precious wood, because I finally felt that I had done everything to the best of my ability. 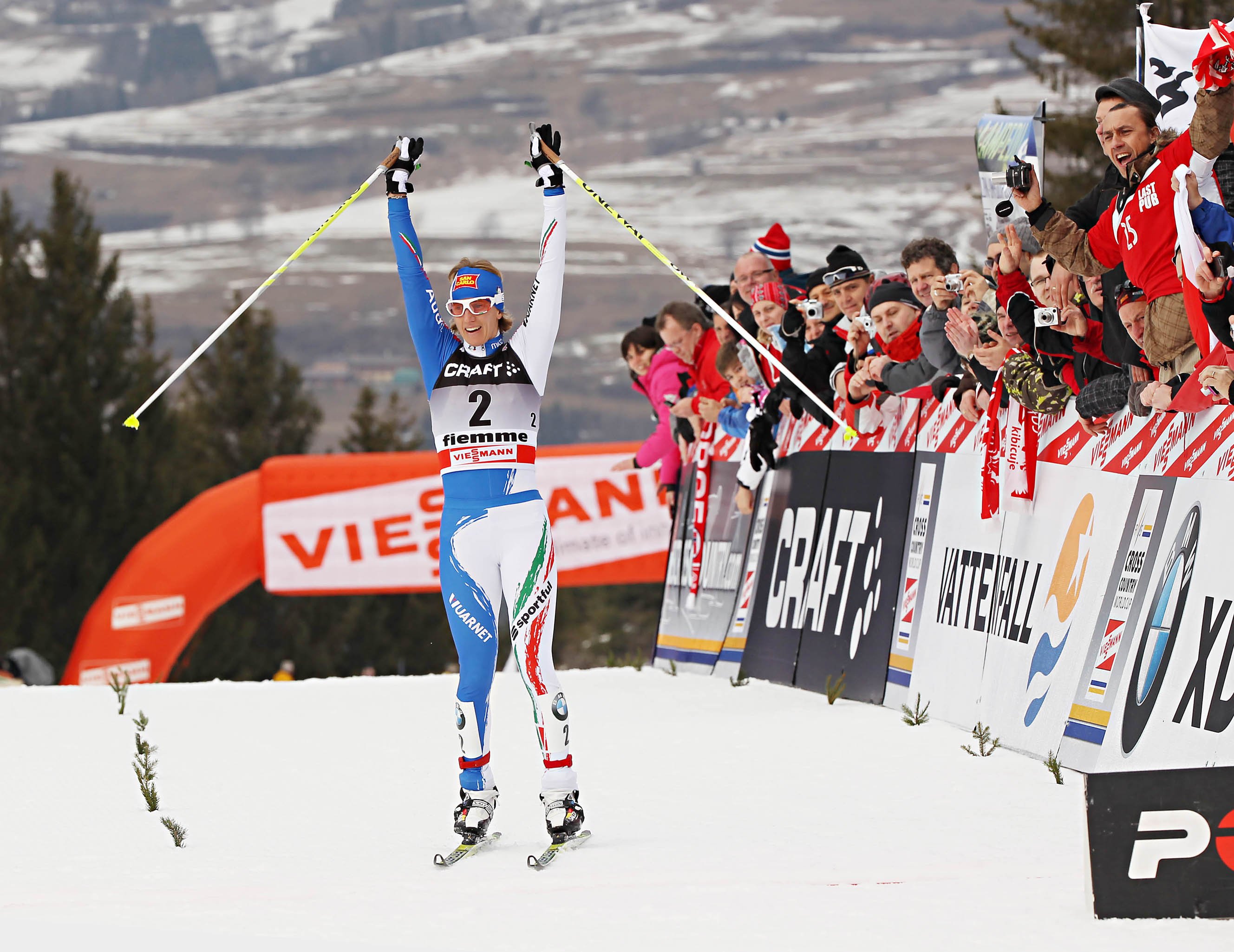 At the end of the journey I realized that sport is a matter of reflections and lights, of images and words, in which the knowledge of one becomes the heritage of all, and fatigue and hunger are the only multipliers.
Today I get excited about other people's races, which I live almost in a trance, as if I were somehow trying to transmit to others the energy I still feel, even if I'm sitting on the tip of my sofa. And I think back to the little me trudging along at the back of the pack, looking for a spark. A sudden sparkle that suddenly changes your life.

Livigno Skilift Opening: everything you need to know

ATTENTION! IMPORTANT UPDATE It is with regret that we communicate, following the ordinance signed by...

Not just skiing: 12 experiences on the snow not to be missed in L...