There ever since by Tobia Silvestri

Published by The Owl Post x Livigno on January 21 2022

The Olympics revolution always starts from the bottom up.
It starts at ground level and grows upwards, like a little brother who you watch grow one day at a time. Where I am now, on the far side of China, a short distance from Mongolia, there was nothing until a few years ago.
No structures.
No buildings.
No installations.
Nothing.
Just ice, the mountains and a small local community, that used mules to go up and down the paths and only had electricity until seven in the evening, before someone, somewhere, turned off the meters. 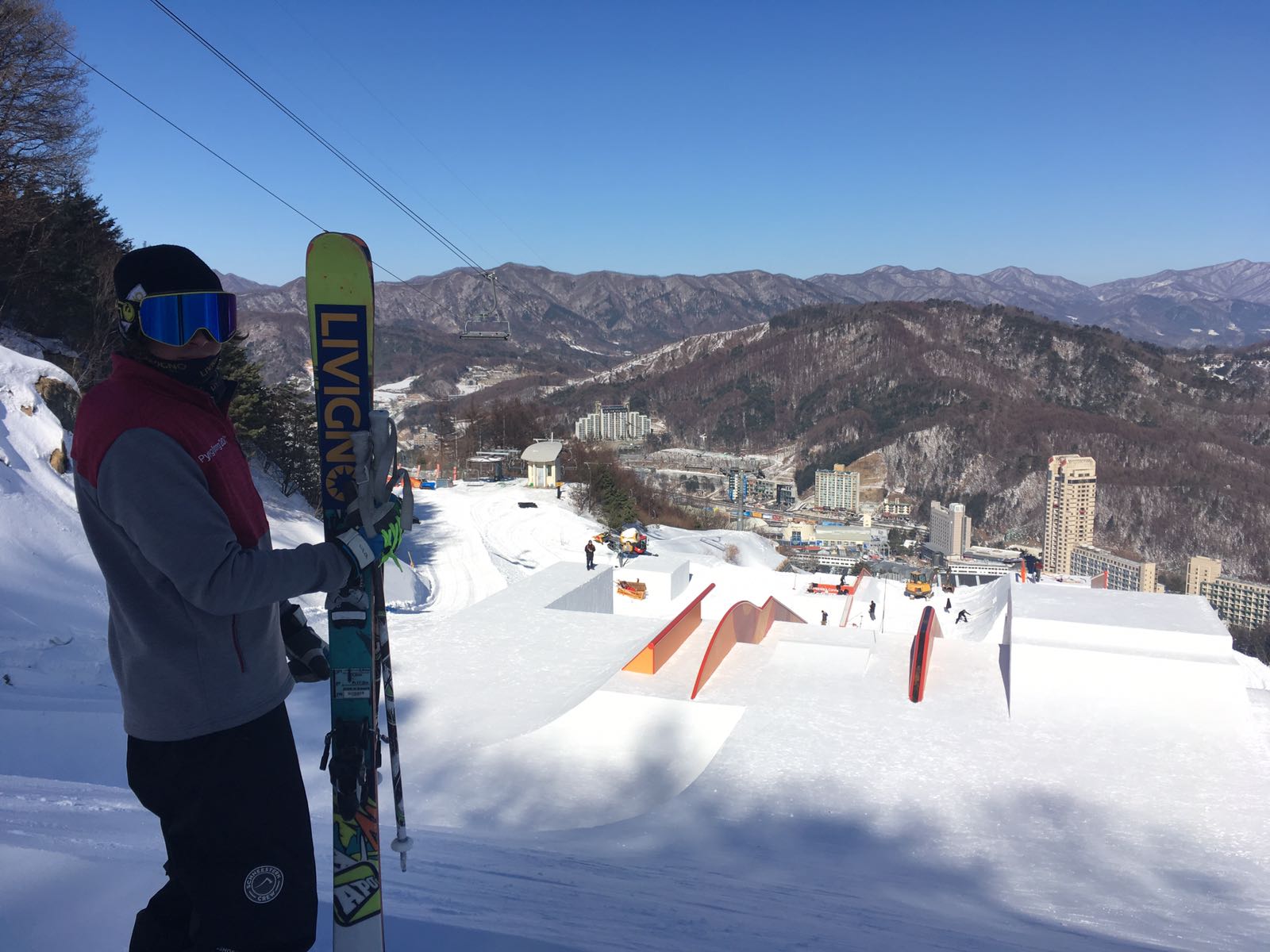 Then suddenly, the Five Circles arrived, that are still some way off, but they are on their way here, and the future emerged like mushrooms growing in the woods. A brand new resort became the front page of a new world that wasn’t there before, and that transformed past history into the future..
From snow mules to snow cats: metal animals with gears as their heat, as large as a house, that will shape the slopes as you imagined them, where there will always be a tiny summary of your life. 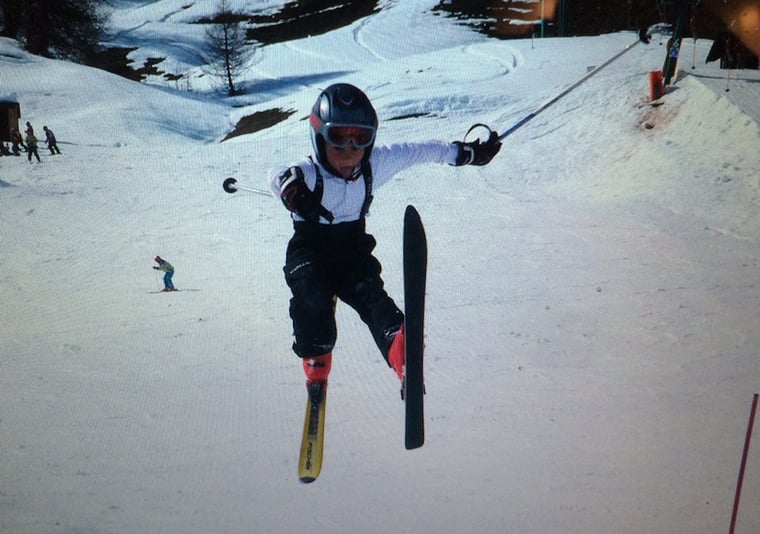 My parents never forced me to do anything.
Or rather: my mother tried to, but never succeeded. Downhill skiing, telemark skiing, snowboarding: whatever Livigno offered, I did it, at least until I got bored with it, and then I would just stop.
Without any regret or guilt.
Even when I decided to leave my first real passion, I wasn’t really that bothered, also because when I took the result factor out of it, I discovered it was even better. In a society made of rules, freestyle is the exception, where the more rules you break, the better you are, the better you are, the more rules you break.
I have always loved jumps, launching myself with my head down towards the valley, with my skis pointing upwards to the sun and the blood rushing to my cheeks. It has never felt like a job, and I never really wanted it to become one. And when I realised that I was finishing after kids much younger than me, who were brought up like real professionals, going to the gym, physiotherapy sessions and other stuff, I decided to stop, almost nauseated by the weight of the competition.

That was not my mountain. That was not my way.
I have always held the mountain's hand, like my father does, trying to dress it in its best suit. Since the time sport was a part of every day for me, my favourite place was the snow cat, inside the cabin. I made my den in that small space full of knobs and buttons, and I could even sleep there when there was a storm outside. 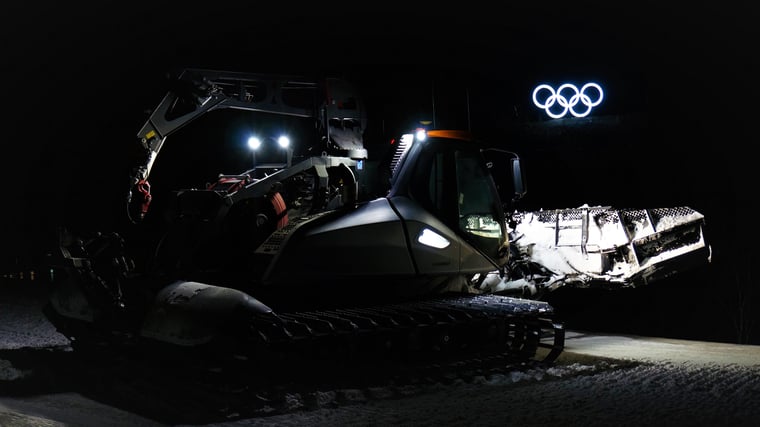 One day, during an event that was taking place in my home snow park, while Dad and I were getting ready for a jump, the head of the firm that was in charge of all the work asked me if I wanted to go to Korea with him, to get the structures ready for the Pyeongchang Olympics. I don’t know what he had seen in me, other than the passion in my eyes while would finish off the jump edges with a shovel. That's because machinery can move thousands of tons of snow, but the final touches are always completed by hand.
The thing I remember most is the email I received just before I was about to set off, when they asked me to take my skis with me too, because as well as building the jumps, I would have to test them too.
I was excited and nervous at the same time, even though, if I think about it now, the content of that email was the last thing I needed to worry about.
When you build jumps for a freestyle competition, you always have to test them before completing the work. You hope it won’t become a crash test, and to do the test you make do with a track 50 centimetres wide where the snow groomer can pass, leaving all the rest unfinished.
So I found myself on the other side of the World being the first person to try out the jumps that would be used to award Olympic medals. At the beginning I did that alone, then in front of the competition manager, then in front of the athletes, the best athletes on the circuit, who asked me to test all the angles and corners of the structure that I had helped to create. 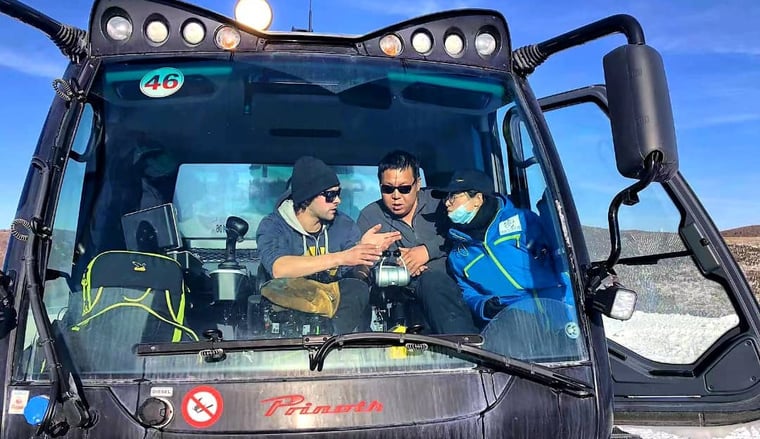 I learnt a lot from that first experience and I use that knowledge in current projects, which are now just a short step from the Beijing Games. They will no longer ask me to test the jumps, not that, but at last I have the opportunity to use my ideas on the track, helping the mountain to express all its creativity.
In doing so, you always start with the slopes, which are not just the gradients, but also the elements of its character and nature of being. The earth base, then the model, dragging on top of it so many thousand cubic metres that it completely changes the way it looks, all part of a process that is the result of calculation and sensitivity in equal measure.
Mathematics and intuition: you need to use both together to create a perfect slope, almost in symphony, giving the athletes the perfect backdrop where they can tell their own story. There are programs that can calculate the perfect degree to set a jump and the relative landing area at, to prevent any discrepancy in the figure from breaking the skiers’ legs.
Those equations, however, are just empty vessels if you don’t put feeling into them, personal sensations.
When you build a slope or a structure, whether for a little competition among friends or for an Olympic event, you can feel whether it's right or not. And I trust that. Metre on metre, bend after bend, I have the sensation that it all creates itself.
As if it didn’t exist, the track had always been there, and instead of building it, you simply came across it, removing the layer of snow that covered the entire mountain. 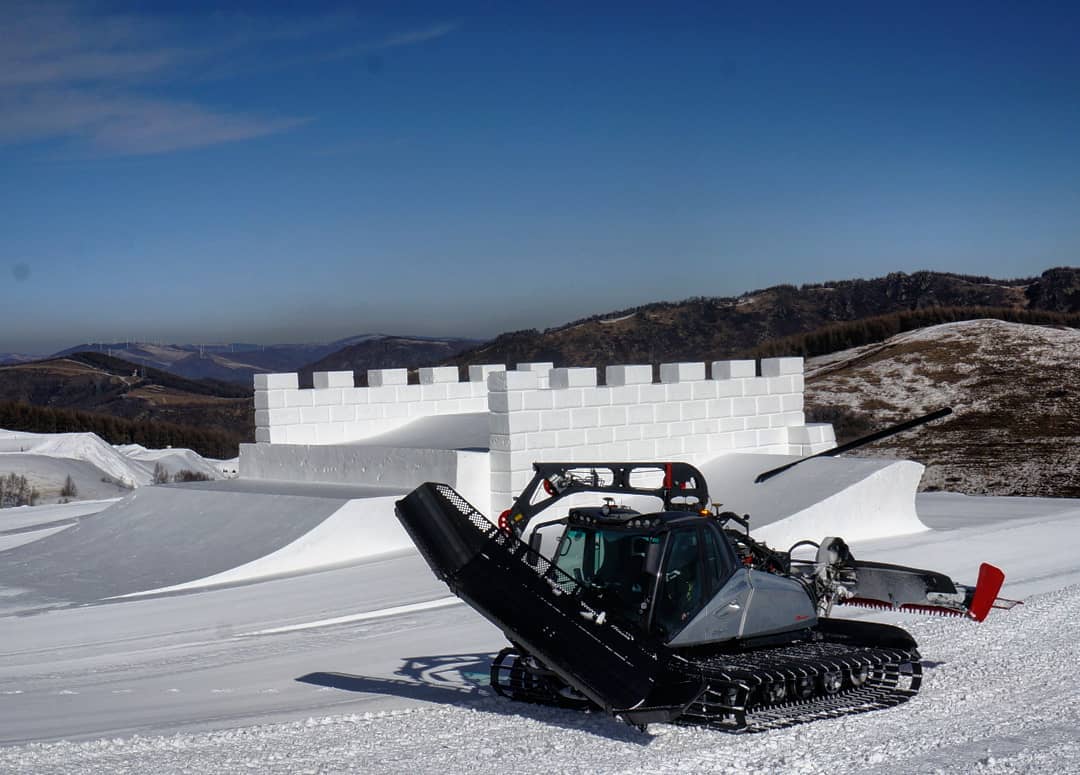 The one thing that tells more than anything that I am making the right choices is sound. The mountain's voice, that changes depending on the angles and the wind. The jumps have a very precise sound, as the snow's surface does when it cracks and breaks under the impact of the skis.
Too much or too little compression is bad for the athletes’ posture and when they hit the ground again, it is noisy, heavy.
There is a hidden elegance in a perfect run, and the gentler and imperceptible the sound the skier makes, the more the slope is dancing with him, and not against him. The ski slopes can’t be tamed, you have to accompany them.
Likewise for the take-off stage, where the sound is even more significant, because to describe a good trajectory, you have to hear a continuous whistle sound, that lasts the entire time of the jump. Like the clean cut when you are tearing a sheet of paper: it has to merge with the air and lose itself in the wind.
It is a combination of imagination and programming, where everything, from the humps to the jumps, must be skiable in the most ways possible. leaving the athletes to decide which which to face them at any time.
There is no greater satisfaction than seeing the great champions launching themselves contentedly on a jump that you have built, with your own hands, trying out increasingly complicated evolutions each time. You watch them doing one death-defying jump after another, then two, then you see them egging each other on, driving themselves to go even further. And while your eyes are filling up with satisfaction, there is always the same identical sound of a perfect construction in your ears, the invisible protagonist of the film they are acting in. It is like magical. Being a part of it is just fantastic. 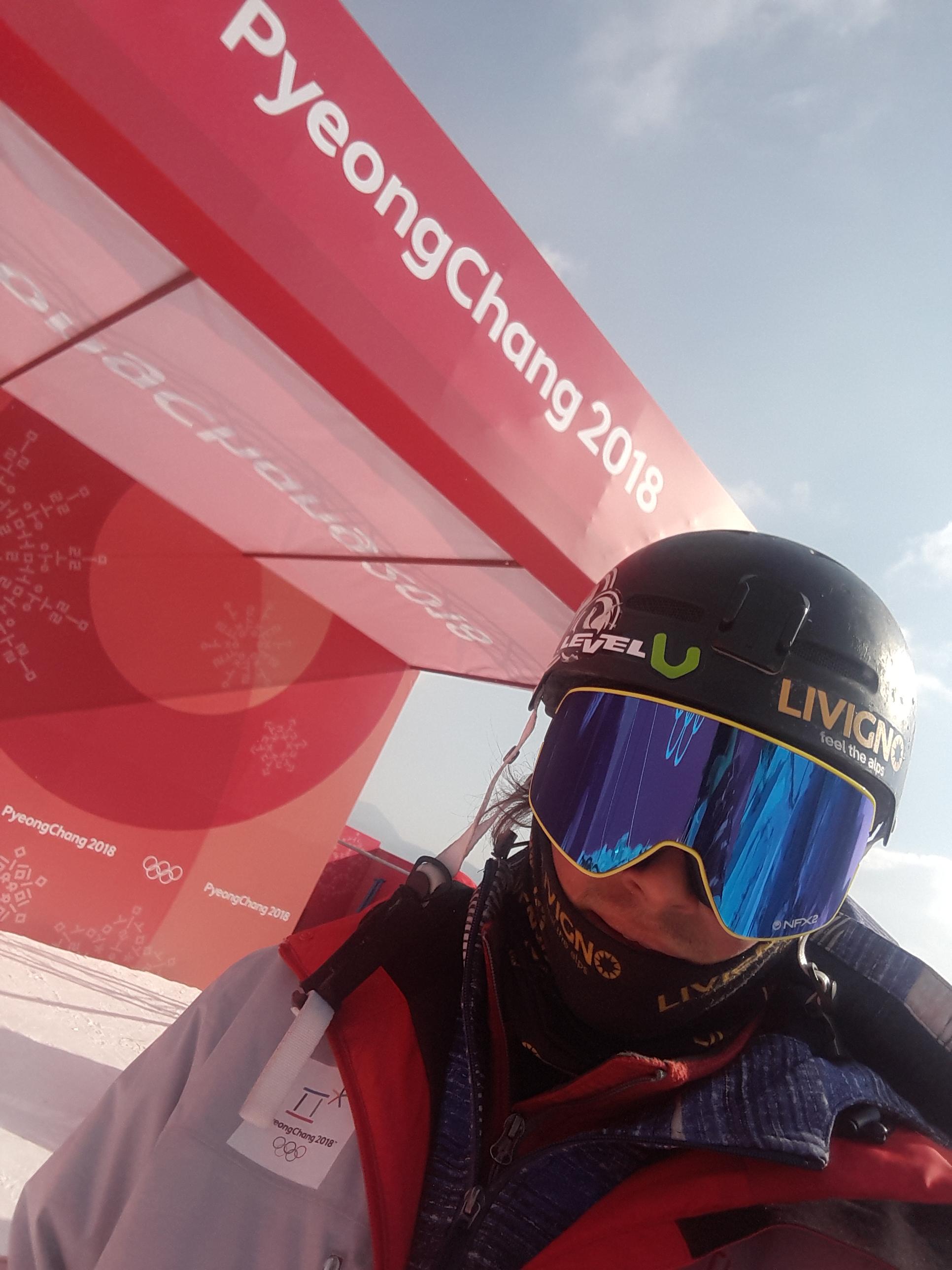 From Livigno to Korea, from Korea to Beijing and, we hope, from Beijing to home, for the 2026 Games where the freestyle and snowboard competitions will be held on my mountains. The thought of what might happen and what will happen, is hard to sum up, as it involves so many things.
I am happy, because what I do is an evolution of what my father does, who began creating jumps by hand, helped by those very people who now design the routes that award Olympic medals.
I still won’t be thirty when the Games are held at home, but I will already have two Olympic experiences behind me, during which I grew from an inexperienced snow groomer to a real constructor of ideas.
I think about all those people from Livigno like me who have passion, a desire to work and so much talent, especially the younger ones, and I think about how this can also be an opportunity to become the protagonists of something important, and take your skills around the world. I think about when I used to fall asleep on the snow cats, exhausted by all the hard work and comforted by the vibrations from the engine. And about how wonderful it would be to hear the unmistakeable sound of a perfect jump echo down to the foot of our valley.