Published by Livigno on February 22 2021

The first flight was a quiet one, from Milan to Rome.
A regular journey, nothing special.
A domestic flight, full of career men with briefcases and families leaving for a classical Roman holiday.
The second flight, from Rome to Sofia, was decidedly more eventful.

They boarded us on a shaky, somewhat rickety military plane, escorted by the Soviet army, who watched us with a mixture of admiring wonder and stiff disapproval.
Those were the seventies, and the whole world was held back and divided up, something today’s youngsters would find really hard to believe.
There was the Iron Curtain, Germany was divided in half, though not exactly half, and the whole of Europe looked like the map of a board game of strategy, something like Risk, in constant turmoil.

We were neither politicians nor actors.
We weren't even sailors or astronauts.
But we were, in our own way, pioneers.

We landed in Sofia and were immediately accompanied to a town not far from the Bulgarian capital.
We were a mixed group, each coming from a different corner of the planet, but all united by the same, intense desire for freedom.
Ours wasn’t just a sport.
It was a message.

These events allowed us to take our ideas and creativity to all latitudes, as well as filling our pockets with a little extra cash, given the hot dog circuit alone was not enough.
The Soviet organisation was well-timed, meticulous.
Hundreds of uniformed soldiers busied themselves on the slope, like a swarm of industrious ants.
Non-thinking executors, who built ski jumps, artificial slopes and moguls on our instructions.
A real stage for our performance the following day.
We went to bed revising our jump sequences and show lineup, savouring in anticipation the ohs of wonder that always welcomed our stunts. 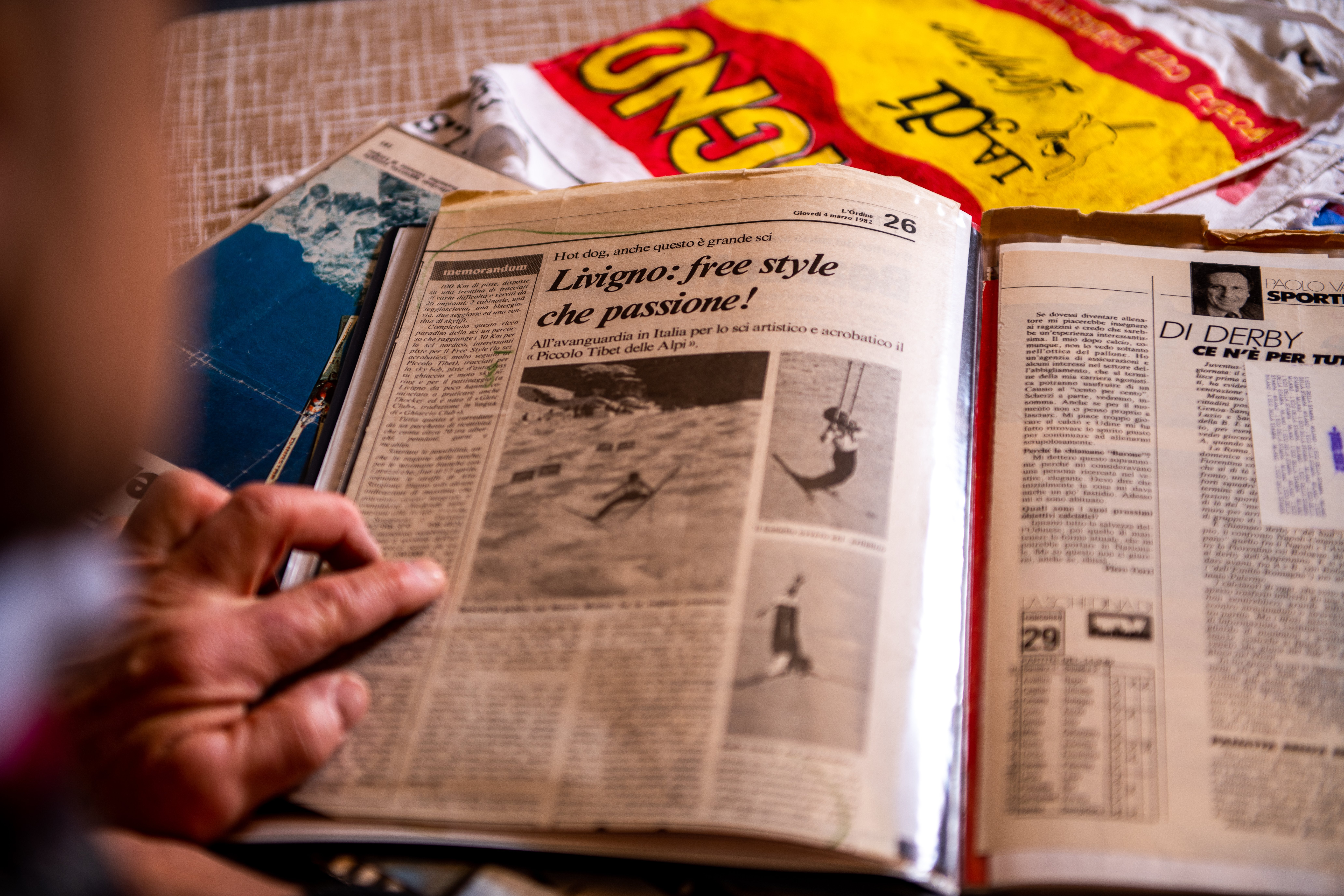 The next morning, when we looked out of the window, the track was gone, having been completely submerged in a sea of black dots, all squashed up together, patiently, diligently waiting for what they had come to see.

They moved as a single body, waiting for the colour and madness the west wind would bring to their snow.
Deviating from their story.
Proof there was another way of thinking.
There were so many people there that, without meaning to, they had destroyed the ski jump.

We rebuilt it.
Then we put on the show of their lives, hailed by shouts and applause, with our style and our clear-minded folly.
Thousands of miles from home, as was always the case at that time, and even further away philosophically, we brought with us a different way of doing things.
Like a breath of fresh air, that opens the mind more than the lungs and is necessary for really finding one’s way in life.

A lesson I learned from an early age.
I was fortunate to live in a hotel with my parents and family during my childhood, a hotel they had built in the early 1900s.
So we were lucky enough to have people around the house all the time.
You had a different kind of relationship with tourists.
We kids used to mix with the tourists’ children. It was mayhem, and that was the lever, the picklock, which introduced you to a world that wasn't that of Livigno, because you were around people who lived a very different kind of life. 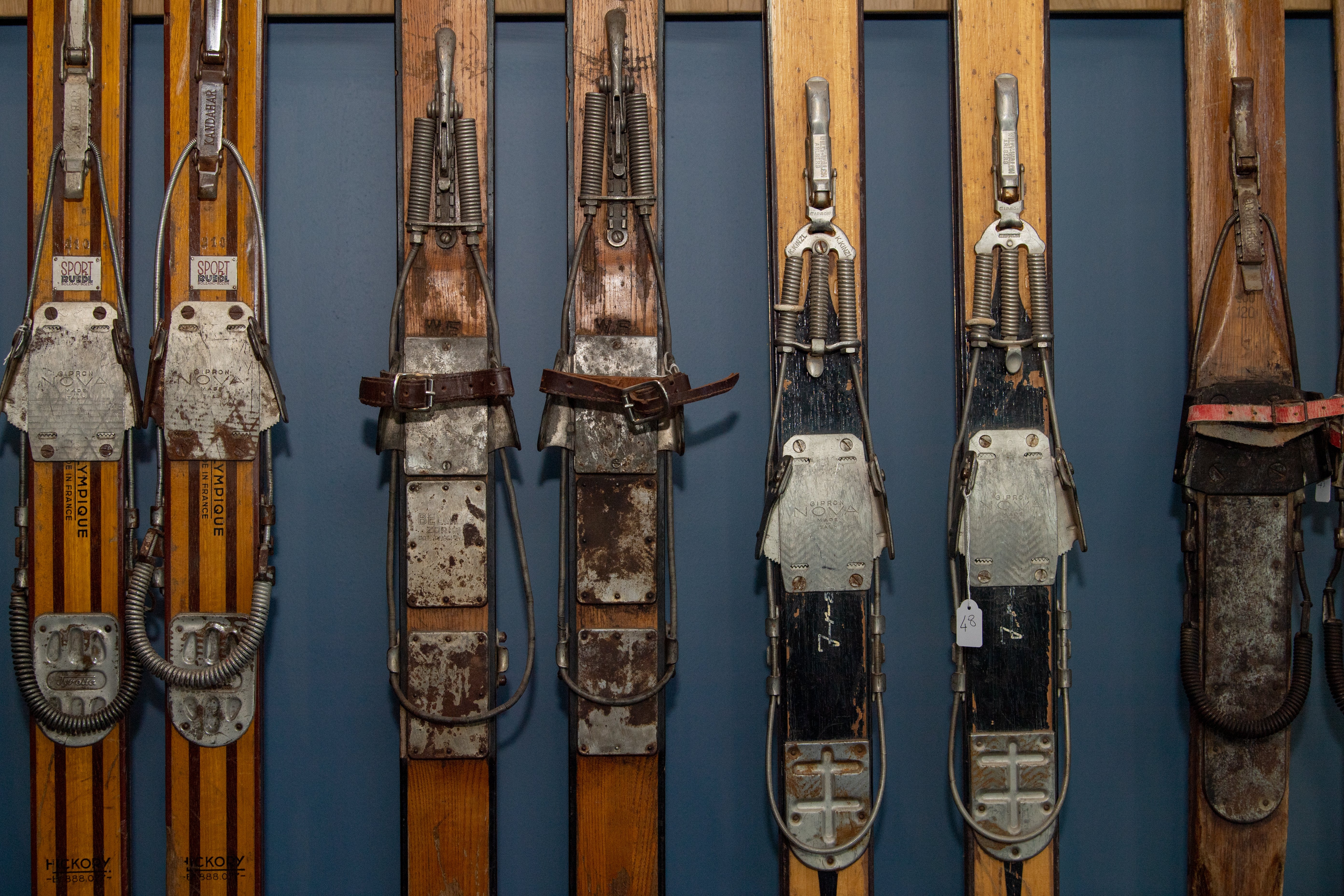 Post-war Livigno was like an earthly paradise, hidden from the view of most people.
An almost inaccessible, yet very beautiful, corner of the mountains, which exerted its unique charm on the townies, forced into confined spaces by the urbanisation of the earth, who came to stay. It emanated the sacredness of the relationship between people and the nature surrounding them.
We lived mainly on agriculture, and until the early 1960s there was no trace of the extraordinary tourism that represents the heart of the local economy today.

Not everyone could afford skis, which is why I remember with affection the moment I was given my first pair.
My father had beaten out a small cross-country ring just in front of our house, and as soon as I was able to snowplough I started using my skis to go to school in the mornings.
It was a little over a kilometre, but still wonderful.

Organised skiing came later.
The Alpine brigades brought it to the area, organising little competitions around the valleys, looking for local talent to take to the regional and national stages.
They came with stopwatches and poles, and set everything up.
They resembled astronauts during the moon landing.
And we watched them with amazement as they flew over the snow as we’d never seen anyone do before.
I left my valley for the first time after winning the stage which took me to the national finals.
I was 8 or 9 at the time and never imagined I’d have left time and time again after that.

Aside being able to ski to get there, school was not for me and I was hopeless in class. My parents decided to send me far away to boarding school to attend upper secondary, but always came to get me around the time the trophy of the districts each year as my skiing skills were instrumental in establishing the town’s supremacy.

The trophy was organised each winter, and losing it meant securing ourselves a year of mockery and teasing from the other half of Livigno.
So it was best to take it seriously.

Growing up, I also began taking part in real races. Those were the boom years for alpine skiing, the years of the “Valanga azzurra”, the Italian ski team of that age, and I managed to achieve some very decent results.
But those were also the seasons of 1968, understood as a moment of rupture, a global movement for rejecting tradition, undermining the rigidness of the ‘right’ way of thinking and fearful.
The image of the skier soon became that of the skier in the family, like in a picture hanging on the wall where everything is in its place, exactly where it should be

But snow is more than that.
Snow is ecstasy and aesthetics. It is finding a limit and redefining it.
Just at the time being a skier had crystallised into the image of a beaten path which was the same for everyone, the spirit of the time exploded like a strong cry of rebellion.
It was the era of off-piste skiing, of searching for the steepest line and deepest snow.
Expressions of freedom we could earn both for ourselves, and everyone else, too.

It was the hot dog era.

The hot dog circuit was a parallel one which came from America, just like the astronauts of the moon landing, and which brought with it all the charm of discovery, a revolution of manners and culture
There were three unique disciplines, new, crazy and packed with adrenaline, and the final result of the competition depended on how one combined them.

Although back then, the final result was the least important thing of all.

The descent between moguls, series of jumps and ballet. You could breathe the electricity of change. We took something age-old, classical and made completely different, dangerous even, use of it, and most certainly hypnotic.
Style, the complexity of the figures, even the excitement aroused in the public were all assessed.
It was a great show, in which there was no longer a filter between idea and action.
Just imagination, courage, a desire to express oneself and let one's free soul stand out. 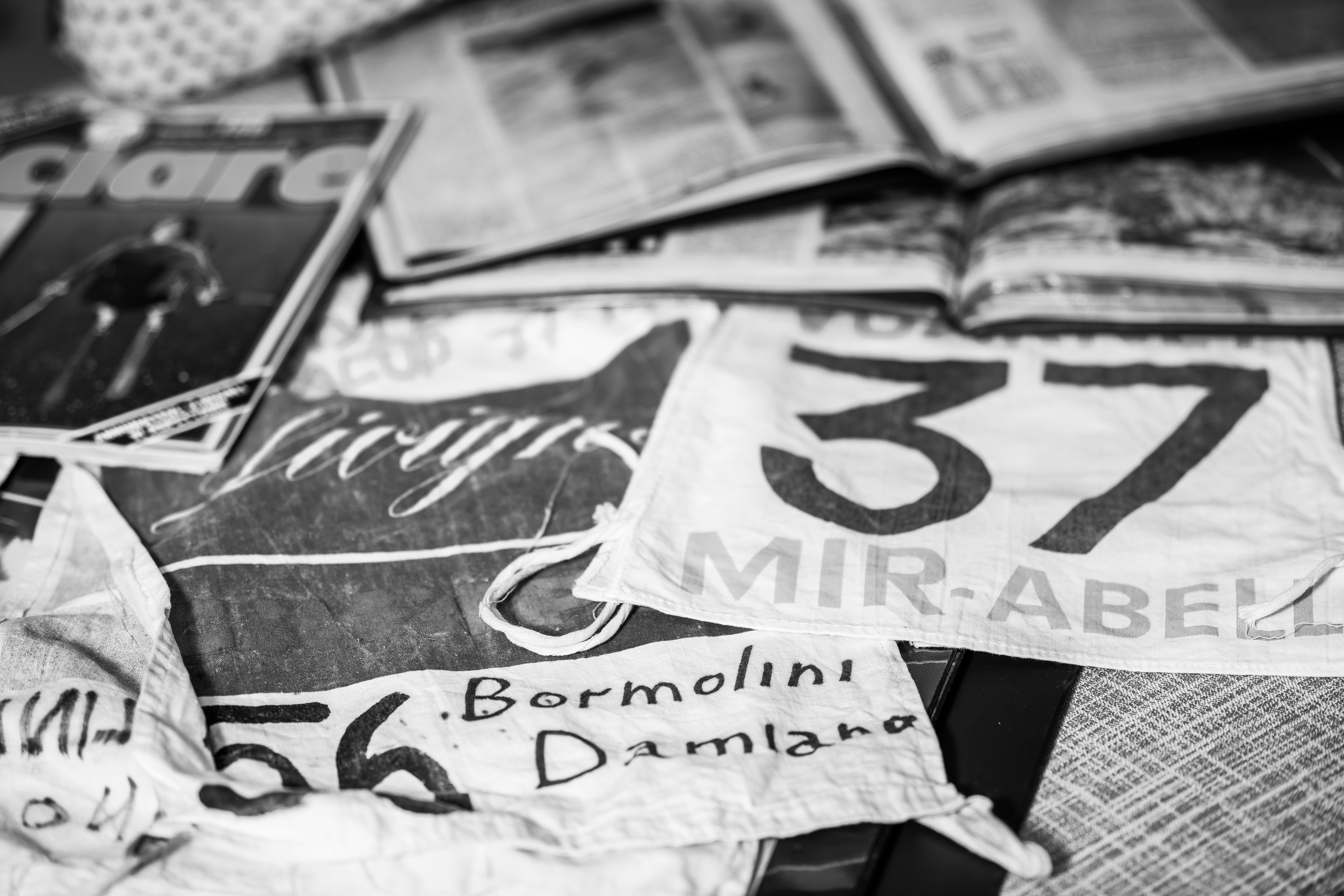 We travelled the mountains of towns all over the world, to carry our message, the expression of belonging to an inclusive environment, where everyone was welcome.
A way of experiencing the mountains in which the only foreigner was fear.
Fear is easy to recognise, its voice is louder than any other in a room.
But we told it: no.
Quite simply no.
Always on the look out for the next figure, the most impressive jump, the craziest, most dangerous combination.
The somersaults, the doubles, the triples, the axels, the single split, which had to become a double next time.

Getting people talking about us was our goal, and this goal gave us strength.
I struggle to relate that same spirit to the life today’s young people can lead.
And yet it must be done.
It must absolutely be done.

"Kids really have to fight for that something.
They’ve got to find motivation in pursuing their passions and managing to achieve their dreams.
These were our dreams
And dreams must be cultivated." 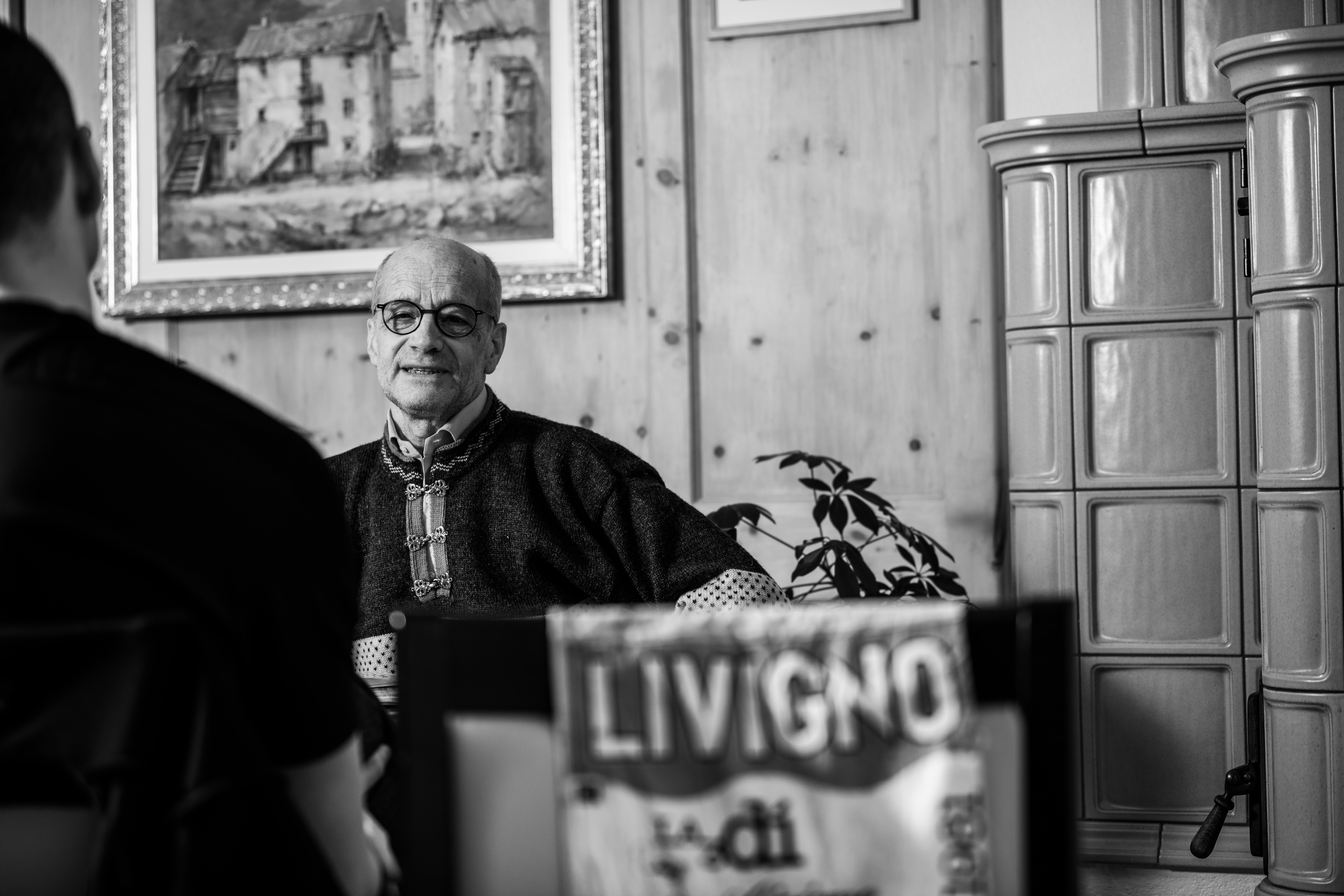 We weren’t afraid of interpreting the times we were living in and the youngsters living in these times must do the same, rebelling against today's orthodox ideas.
Not yesterday’s.

The Iron Curtain is gone and there are no vast crowds waiting for us at the bottom of the valley, finally able to admire something different. But the spirit of that time still dwells in us.
As does the seed of freedom.

The hot dog became the freestyle and is now part of the Olympic program, as only the money of the five circles could guarantee the longevity to which so many of its leading figures aspired.

And it was by no means painless.
It lost some of its unmistakable identity and many of us left the circuit, looking for new battles to fight.

But what we built, our movement, is there to see, it is there to touch and to inspire new generations.
It will belong to us forever, because the business of emotions is the only one in which your product still belongs to you after being sold. 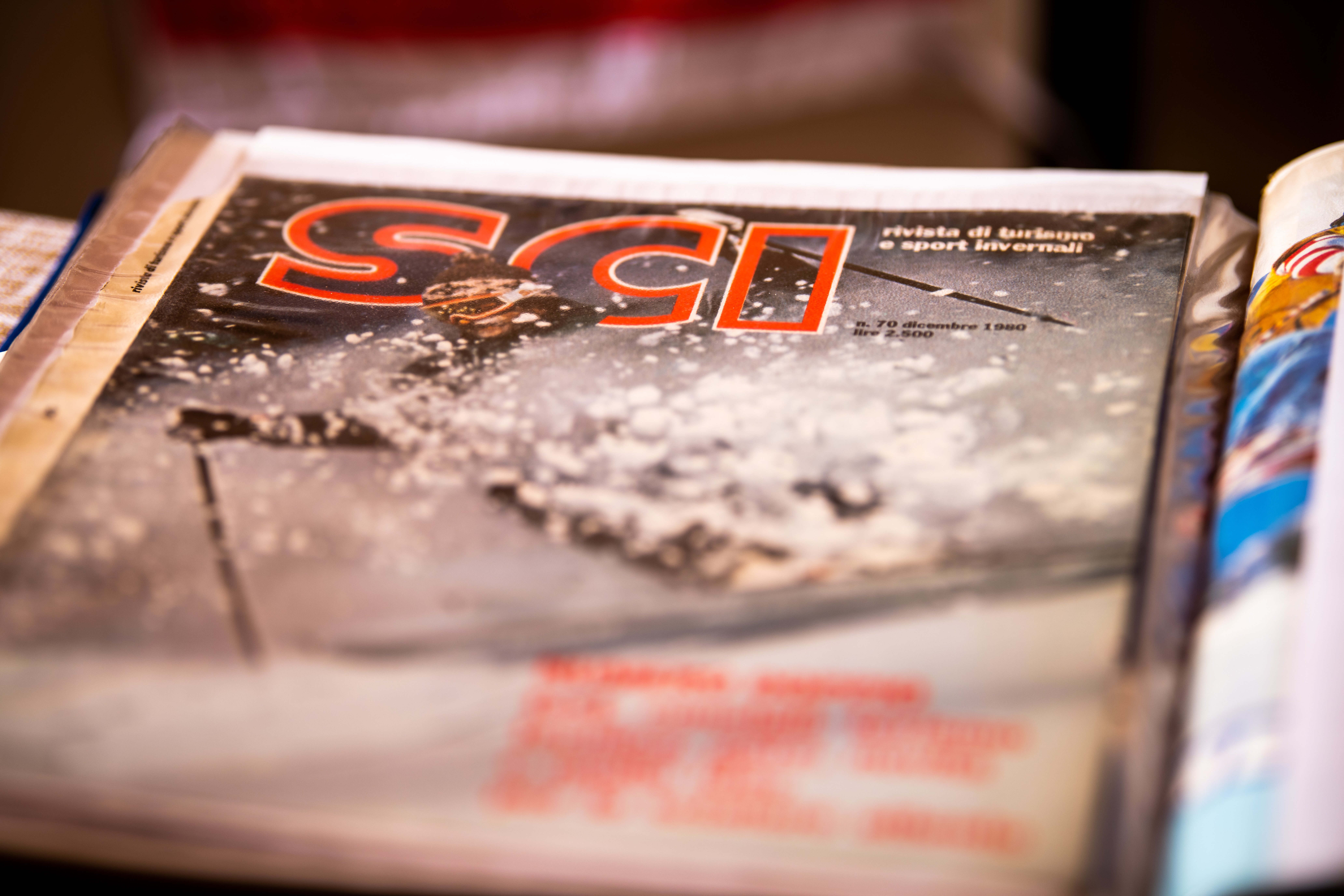 So I'll wait for the Olympics in my Livigno. During these years in which everything has changed, Livigno has kept the sacredness of nature and its indomitable soul intact, a soul that wants to ride the snow, like a faithful companion, without bending to its will.

And I’m waiting for the Olympics with the same excitement with which I jumped off the trampoline. Which is just how I felt as a child, in the days of our very first descents, because you can also travel the world, but in the end you always go back to your origins. 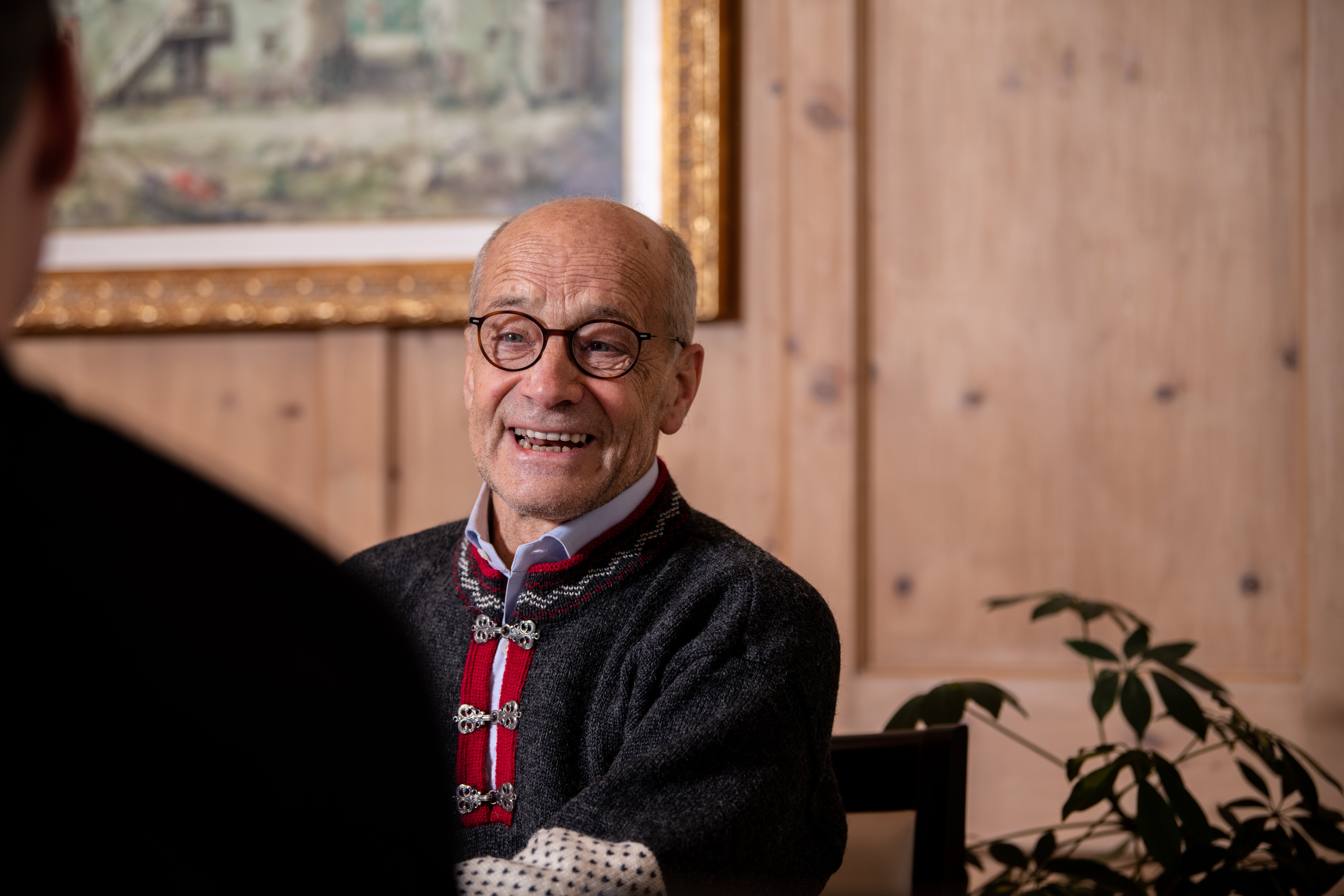 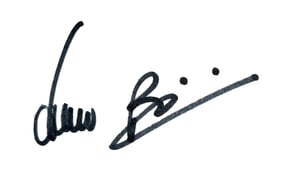